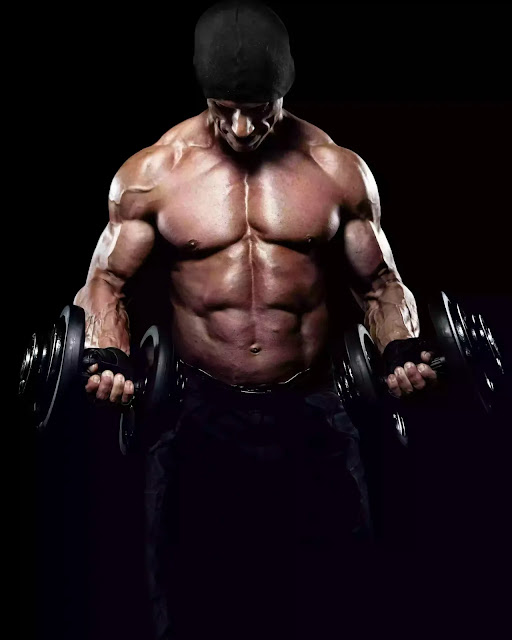 The biceps are the most attractive muscles when it’s pumped you feel more comfortable in the gym. There are various types of workout to grow big biceps muscles to train absolute faces.

The majority of people mostly focus on their biceps, as known as its big muscles, and take more time to train it. 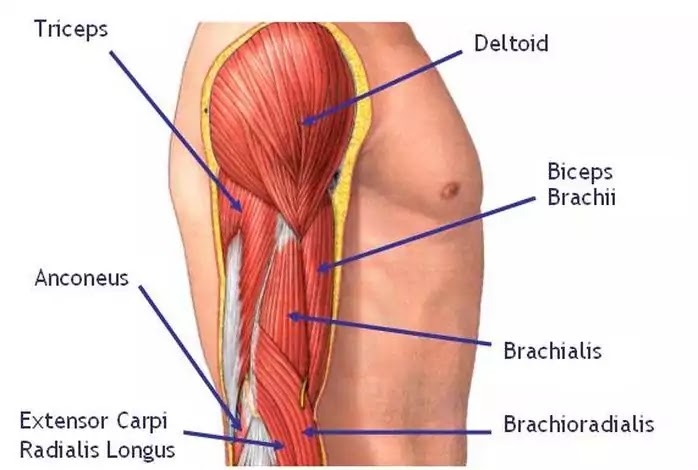 The biceps is a muscle on the front part of the upper arm connected to the shoulder. The biceps includes a “short head” and a “long head” that work as a single muscle and can train by different biceps workout exercises.
The biceps is attached to the arm bones by tough connective tissues called tendons.
1. The tendons that connect the biceps muscle to the shoulder joint in two places are called the proximal biceps tendons.
2. The tendon that attaches the biceps muscle to the forearm bones (radius and ulna) is called the distal biceps tendon. When the biceps contracts, it pulls the forearm up and rotates it outward.

The bicep comprises of three main muscles, the biceps brachi, brachialis, and brachioradialis. In order to achieve optimum growth, we need to train all three muscle groups of the biceps. 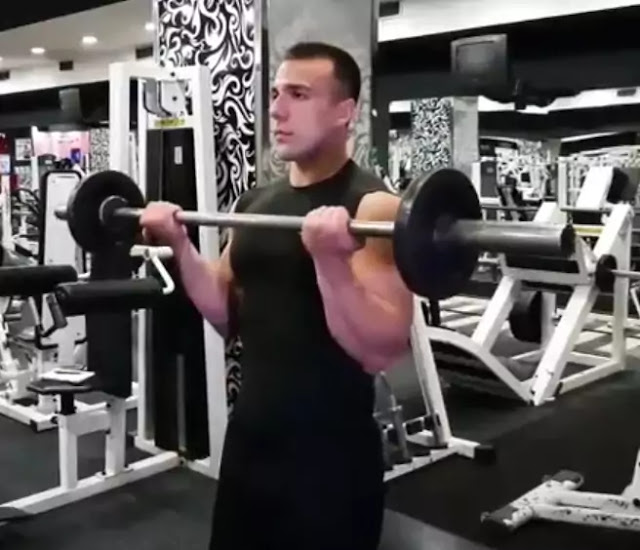 The barbell curl is one of the more iconic biceps exercises. When done correctly this exercise targets the biceps and can add serious size and strength to the entire muscle, often with higher amounts of loading the other biceps exercises.
The biceps all workout most popular and most effective exercise is the standing barbell exercise. Also probably the first exercise that comes to mind on arms day.  A standing barbell can be done with the verity of griping situation, Most common are wide grip, that is slightly wider than the shoulders and close grips, grips come inside of shoulder width.
The exercise targets the bicep brachi muscle. It just holds the bar according to your carrying angle which is the right way to perform these bicep curls.
How to do it.
1. Take a straight barbell and fix weight from minimum to maximum according to your targeted weight.
2. Grip barbell first wider than your shoulder with both hands in parallel position in a standing condition.
3. Fix upper arm and move lower arm towards of upper arm in the concentric phase, release lower arm in starting eccentric phase.
4. Repeat reps in 3 sets of 15,12 and 10 reps.
5. Maintain muscles rest time 30second in between each set for recovery of micro muscles. 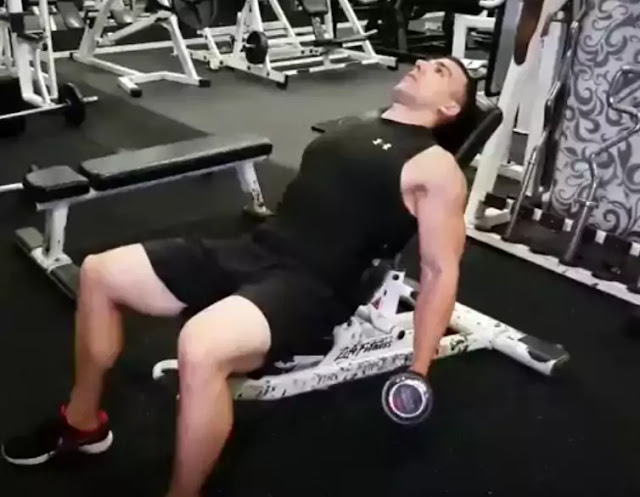 A most common variation to target the bicep brachi muscle is in the incline position. In this exercise, the bicep is in its most lengthened state and the shoulder joints are hyperextended. Always keep your head on the bench and perform the curls with elbows perpendicular to the floor.
How to do it.
1. Sit with the dumbbell in incline bench, take your backrest in incline bench, keep your face upwards, elbows close to your torso, and rotate your hand until they are not facing forwards. this will be your starting position.
2. While holding the upper arm in a fixed position, curl the weight forwards while contracting the biceps, exhale your breath.
4. Continue the movement until your biceps fully contract and the dumbbells are at shoulder level.
6. Hold the contract position for a second.
7. Now slowly bring the dumbbell starting position, inhale breathing.
8. Repeat the same for three sets with each 15,12 10 reps with gradually increasing weight. 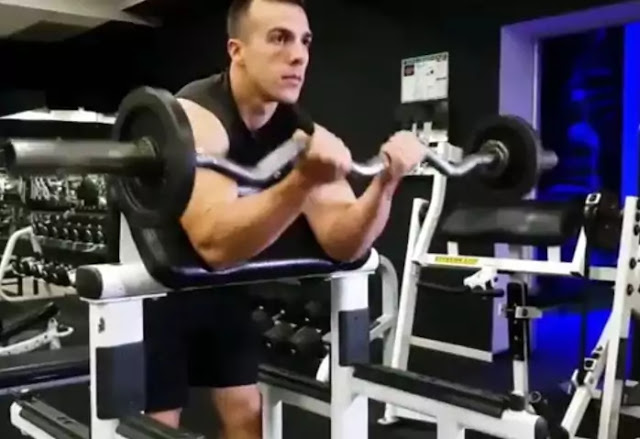 Another widely used biceps exercise is the preacher curl. Since the elbows are placed forward and rested on the machine’s cushion, the biceps are in a semi shortened position during this exercise. This creates great tension in the bicep brachi muscle which further leads to better hypertrophy.
How to do it.
1. To perform this workout we need E-Z bar and preacher bench.
2. Lift E-Z bar, your palm should be facing forwards and slightly tilted due to the shape of E-Z bar.
3. Rest your triceps side in the preacher,  As you Exhale breathe, lift E-Z  bar upwards until it reaches to shoulder level.
4. Hold the contract position for a second.
5. Now slowly bring the dumbbell the starting position, inhale breathing.
6. Repeat the same for three sets with each 15,12 10 reps with gradually increasing weight. 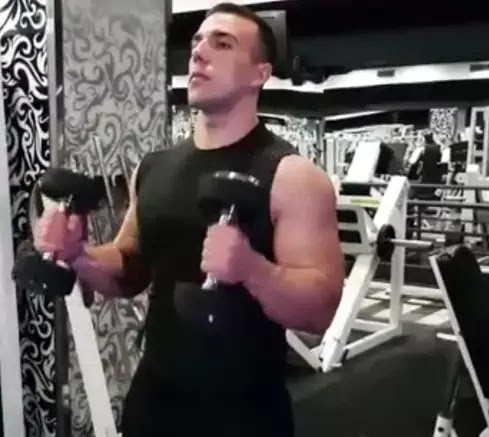 The hammer curl is a dumbbell curl variation that places the wrists in the neutral position, therefore isolating the brachialis and brachioradialis (outer biceps and forearm).
1. Benefits of the Hammer Curl that coaches and athletes can expect to gain muscles when adding this bicep and forearm building exercises.
2. Increased Arm Size and Strength significantly, however, the hammer curl gain size and strength to the outer aspect of the biceps and forearms.
3. Improved Grip Strength due to its targeting of the brachioradialis and forearm/grip muscles
How to do it.
1. Take a pair of dumbbells within the hands to your sides, palms facing the body.
2. Exhale breathe, Lift the dumbbell upwards, the thumbs should come up first, making sure to not rotate the wrist into the supinated or pronated position, keep the wrist neutral condition.
3. The elbows should move about 100-130 degrees, forcing the biceps to contract aggressively at the top.
4. Hold the contracted position for a second.
5. Now slowly bring the dumbbell starting position, inhale breathing.
6. Repeat the same for three sets with each 15,12 10 reps with gradually increasing weight. 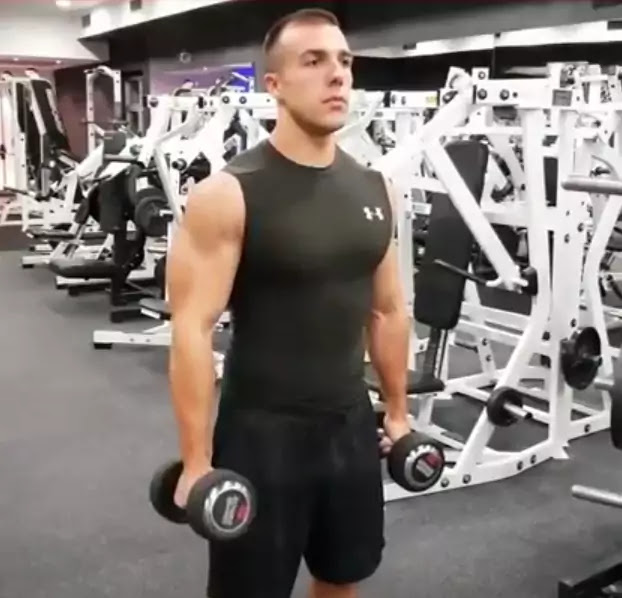 Standing up dumbbell biceps curl one of mot common use exercise for train long head and short head of biceps. its give a slight effect on your forearms.
How to do it.
1. Stand up straight with dumbbells in both hands at arm’s length.
2. Keep your elbow close to torso, rotate the palms until they are face forwarding. This will be a starting position.
3. Exhale breathe, curl the weight while contracting biceps.
4. Continue to raise the weight until biceps fully contract,
5. Hold the contract position for a second.
6. Now slowly bring the dumbbell starting position, inhale breathing.
7. Repeat the same for three sets with each 15,12 10 reps with gradually increasing weight. 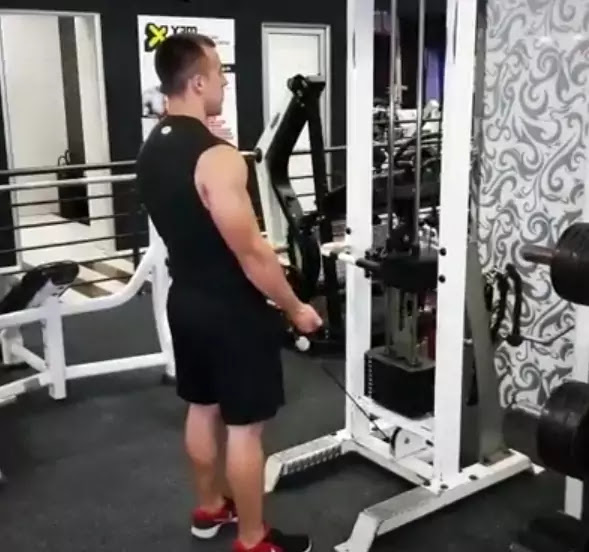 Standing biceps cable curl is an isolation workout for upper arms biceps muscles, It’s a pulling action performed by cable machine and its suitable for beginners.
How to do it.
1. Cable set in the bottom of the machine, standing condition with facing towards the cable.
2.  Stand up with your torso upright, holding a cable curl bar that attached with low pully.
3. The palm of your hand should be facing upwards holding with cable. This will your starting position.
4. Fix upper arms in a stationary condition, curl your bar contracting with biceps as you exhale breathing.
5. Continue contracting until your biceps full contract and cable bar is shoulder level.
6. Hold the contract position for a second.
8. Now slowly bring the cable bar starting position, inhale breathing.
9. Repeat the same for three sets with each 15,12 10 reps with gradually increasing weight.